Rochdale AFC’s matchday programme – The Voice of Spotland – is back for Saturday’s League One fixture against AFC Wimbledon.

The programme is once again a 76-page issue, containing plenty of reading to keep fans entertained and informed before, during and after the match.

We start with a front cover image of Andy Cannon, who has turned in several excellent performances since returning to the team at the start of the year.

Andy is also the subject of our ‘Decades Apart’ feature, where his likes and dislikes are compared to a Dale player from the past.

In our comprehensive visitors’ section, contributors David Chaffey and Dean Smith bring us a different aspect of AFC Wimbledon’s current form and news, which is in addition to the usual statistical round-up of the teams’ meetings down the year.

John Rowe reflects on watching the first Spurs game on television in sunnier climes, while Irish supporter Brian Quigley tells us how AFC Wimbledon and a BBC TV programme are linked – and it’s not The Wombles!

‘Kit Cupboard’ reflects on what was being worn in League Two in 2008/09 and our usual quiz and puzzle pages, that can be attempted by supporters of both clubs, appear once more.

Regular historical features – ‘On This Day’ and ‘Through The Years’ – continue to look at games and events from Dale’s past and Richard Wild tells readers all about his favourite 5-0 away win.

Action photos appear from the games against Millwall and Bristol Rovers, while Traveller’s Tales reports on the trips to Millwall and Northampton.

Visitors AFC Wimbledon get nine pages of coverage, which includes a quiz-based article on a previous meeting between the clubs. 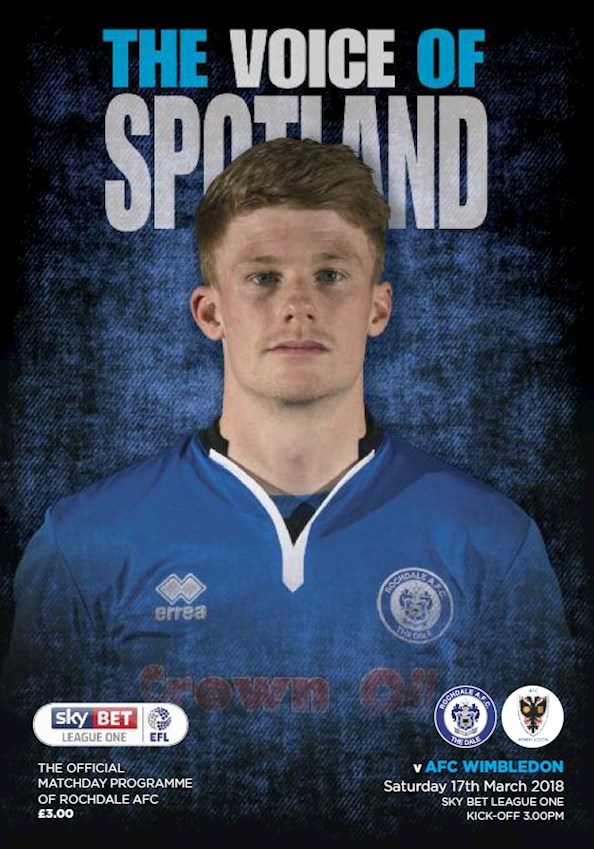