Rochdale AFC’s matchday programme – The Voice of Spotland – is back for Tuesday’s Checkatrade Trophy tie against Oldham Athletic.

We start with a front cover image of the Checkatrade Trophy, as well as images of Luke Matheson, Daniel Adshead and Aaron Morley, three of Dale’s young players who have made major contributions in the competition so far this season.

After that, the 24-page programme contains plenty of interesting features, including:

ANORAK’S CORNER – this is Dale’s 50th home game in the EFL Trophy, so we take a look back at the previous 49.

WE’VE GOT HISTORY – A comprehensive look at past meetings between Dale and Oldham, as well as our previous games in cup football.

TRAVELLER’S TALES – What happened when Dale visited Fleetwood in the group stages of this season’s Checkatrade Trophy.

‘On This Day’ looks at Dale events on 5th December, while we have full coverage of the Oldham squad and action photos appear from the home game against Charlton.

All this and more will be in Wednesday’s The Voice of Spotland, on sale in the Club Shop and around the ground, priced £2.00. 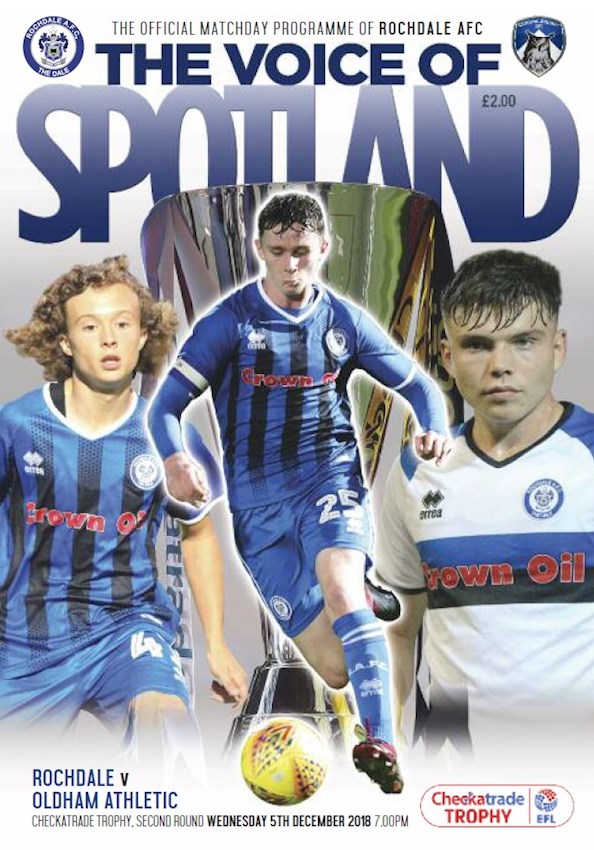