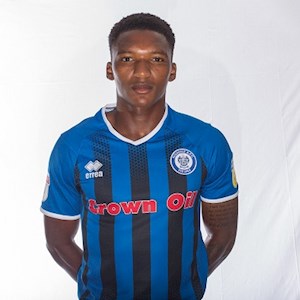 Kgosi is a defender, who can comfortably operate at full-back or in the centre of defence. He joined Dale in July 2017 following his departure from Stevenage.

The 24-year-old moved to the UK from South Africa in 2005 and was spotted playing for a local club, Southside, by Peterborough United.

Kgosi signed a scholarship with Posh in 2010 and went on to make his professional debut for the club in a Championship game at Watford two years later.

He really established himself with Peterborough in 2013/14 and in total made 89 appearances in their colours before moving to Stevenage.

Ntlhe represented his country five times at U20 level, playing in the 2012 Cape Town International Challenge against Argentina, Nigeria, Ghana and Brazil

He was called up to the senior national squad for an international friendly against Brazil in June 2013 and went on to make his international debut as a second half substitute against Morocco the following October.