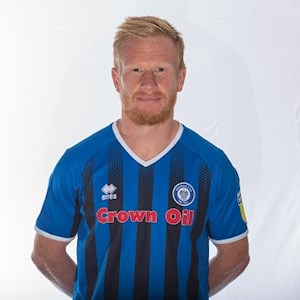 David is a midfield player who joined Dale in July 2018 to start his second spell with the club.

The 36-year-old has spent the past three seasons with Wigan Athletic, whom he twice helped to the League One title, as well as playing in the Championship in 2016/17.

Perkins initially linked-up with Dale in January 2007 when he was one of Keith Hill’s first signings after replacing Steve Parkin as manager.

Moving to the Crown Oil Arena from Morecambe, he became a firm favourite among Dale fans in his 18 months at the club, which was cruelly ended when a red card in the League Two play-off semi-final against Darlington saw him miss the final at Wembley through suspension.

David opted to join Colchester in the summer of 2008 and after three years in Essex, which included loan spells at Chesterfield and Stockport, he returned north to be re-united with Hill at Barnsley.

Perkins made 100 appearances for The Tykes, before his next move took him to Blackpool in the January 2014 transfer window.

He was a regular in a year-and-a-half at Bloomfield Road, until Wigan stepped-in in May 2015 to recruit David as a driving force in their attempt to climb out of League One at the first attempt.