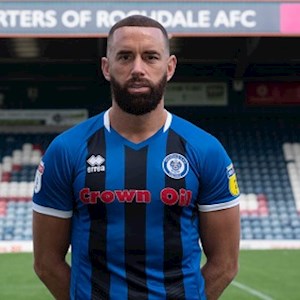 Aaron, know as Alby, is an experienced forward who joined Dale on a free transfer from Bolton in July 2018. He signed a new deal with the club this summer.

The forward, who turns 40 this year, spent the previous season with The Trotters where he was mainly used as a substitute and it was after coming off the bench that Aaron scored the goal that kept the club in the Championship on the final day of the campaign.

Wilbraham was a teenager when he first played league football for Stockport in March 1998. A week later he netted the first goal of his career in County’s 4-1 defeat at Manchester City.

Aaron spent the next six seasons in Stockport’s first team squad, before moving to Hull in a £100,000 transfer in July 2004.

A year later he switched to MK Dons and enjoyed the most productive spell of his career with 57 goals in just over 200 appearances.

Wilbraham followed that with stints at Norwich and Crystal Palace, before he joined Bristol City in July 2014 and helped fire them to the League One title and Johnstone’s Paint Trophy in 2014/15 with 21 goals in all competitions.

He left Ashton Gate at the end of the 2016/17 season, returning north to Bolton, where he took his career tally to 138 goals in 633 appearances.