Next season marks Dale’s 100th anniversary in the Football League and to mark the occasion we will be introducing a retro away kit for the 2020/21 season!

Rochdale AFC was accepted into the Football League on 16th March 1921 and to celebrate, we are looking back at our kits over the years and asking you, the fans, to vote for your favourite retro away kit.

We have shortlisted six kits, plus one question mark kit for you to choose, and the kit with the most votes will be produced by Errea with a modern twist and worn as Rochdale’s away kit next season.

The winning kit will proudly display the Crown Oil logo on the front of the shirt.

You can vote now in the Club Shop or register your vote via email: competitions@rochdaleafc.co.uk.

In addition, all voters will be entered into a prize draw to win a VIP trip to Italy for two, to see the first retro kit being manufactured at Errea’s factory in Parma.

The voting deadline is Monday 14th October. Check out information on the history of each kit below!

The club would like to thank our Programme Editor, Mark Wilbraham, for his contributions to this project.

The red and green striped shirts were worn during the 1980/81 campaign. They were manufactured by Coffer Sports, who went on to produce Dale kits for a further two seasons. This unusual choice of colours first appeared as Dale’s away kit in 1978/79 and then occasionally reappeared at various points over the next four years, last being seen in the 1982/83 season. The kit was worn in the FA Cup third round replay at Bury in January 1980, where Dale lost 3-2, but went very close to knocking-out their higher division neighbours. Pinstripes were all the rage for football shirts in the early-1980s and Dale jumped on the bandwagon with their 1983/84 outfits.

The home kit was a classic blue and white design and the club and manufacturers Spall Sports replicated the template with the away strip in white and green.

Maybe it looked a bit like a Northern Ireland change kit, but the boys from Ulster weren’t sponsored by Sheridan Electrical! The same template was then used on the 1984/85 away kit, which was a classic yellow shirt with blue pinstripes, blue shorts and yellow socks.

The small matter of the All-in-One Garden Centre’s watering can logo also made an appearance, although it did get plenty of publicity at the time! The team’s away kit in 1989/90 and based on the same template used at home, which provided consistency.

It was worn at Crystal Palace in February 1990, when Dale played in the fifth round of the FA Cup for the first time, as well as in many of the team’s nine away wins, which was the highest total in 43 years.

The club started to add a shade of green to their home kits in the mid-1990s, with subtle trim on the collars, cuffs and shoulders offsetting the blue and white nicely.

This green – under the name jade – became the main away colour in 1995/96 and proved to be one of the best-selling shirts of that era.

The green was complemented by wide black pinstripes, producing a unique combination of colours that also looked good when just worn as a casual shirt.

Worn in a famous 2-1 win away to a Preston side who would go on to win promotion two months later, the kit was still worn as a third-choice strip over the next couple of seasons. 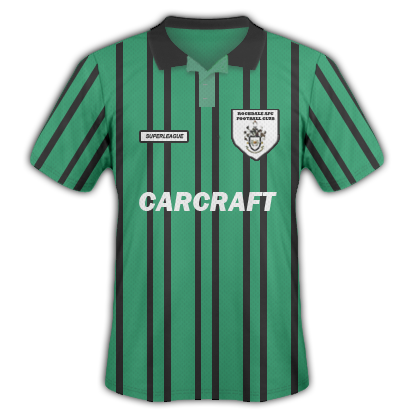 KIT G – CHOOSE YOUR OWN FAVOURITE AWAY KIT FROM THE PAST

Send in your suggestions to competitions@rochdaleafc.co.uk.