Rochdale AFC’s matchday programme – The Voice of Spotland – is back for the Tuesday’s League One fixture against AFC Wimbledon.

We start with a front cover image of midfielder Ethan Hamilton, who has made a big impression since joining Dale on loan from Manchester United.

Manager Keith Hill looks ahead to the night’s game, while Editor Mark Wilbraham compares The Dons’ FA Cup run to that experienced by Dale 12 months ago.

I WISH I’D GONE – an article looking at Dale games the author didn’t attend, but wished he had! This time it’s a Coca-Cola Cup tie from the early-1990s.

WHAT DALE WORE IN – we pick a season and look at the different kits Dale sported throughout the campaign. In this issue, we look at the 2013/14 campaign.

GOLDEN YEARS – Dale won promotion for the first time in 1968/69 and this series will recall that campaign game-by-game, with personal memories from fan Ian Goodwin, who has been talking to a player from that season in Tony Buck.

Action photos appear from the games against Doncaster and Burton, while Traveller’s Tales is back with a report on the trip to Peterborough.
All this and much, much more will be in Tuesday’s The Voice of Spotland, on sale in the Club Shop and around the ground, priced £3.00.

You can also buy hard copies of our matchday programmes online > https://www.rafctickets.co.uk/retail.aspx?headid=16&deptid=163&title=2018/19 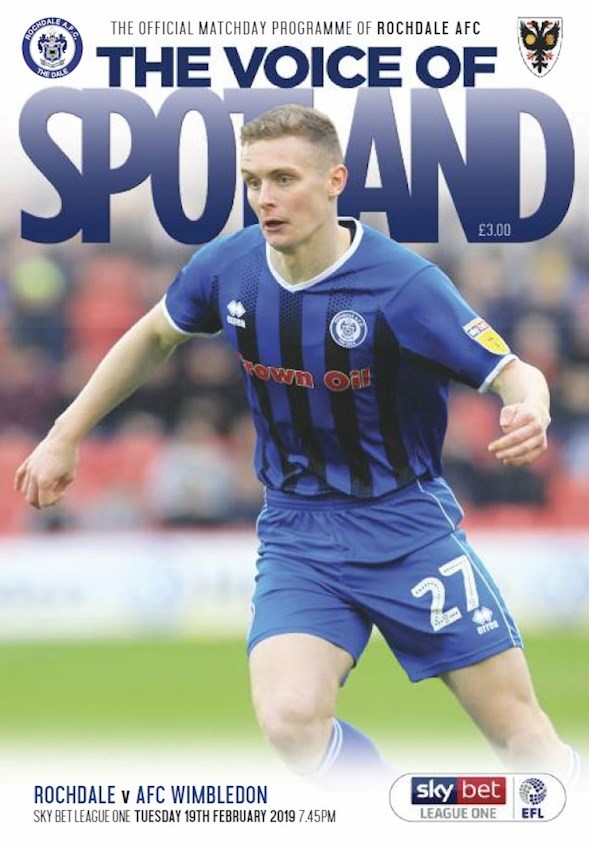