The Rochdale AFC Academy has been hugely successful in recent years, in bringing players through to the Dale first team, and also expanding massively.

Eagle-eyed supporters may have noticed mentions across club channels of the Elite Development Squads (EDS) and Development Centres.

Here, we explain how both of these link and feed into Rochdale AFC and the Academy.

The Rochdale Academy operates from Under-9 through to Under-18 level, and provides a direct link to the Rochdale AFC first team.

The U9-U16 sides play throughout the season on Sundays, with those in the U16 squad aiming to earn a two-year full-time scholarship at Youth Team level.

The scholarship includes education overseen by L.F.E., League Football Education, which potentially opens up pathways into further education in the UK or abroad, employment and semi-professional football.

Scholars play for the Youth Team between the ages of 16-18, in the EFL Youth Alliance League and various cup competitions, including the prestigious FA Youth Cup.

Their ultimate goal is to earn a full-time professional contract and become a part of the Rochdale AFC first team.

There are also pre-Academy sessions for those too young for the U9 side, that take place at the Soccer Factory in Rochdale, and these are invite only.

The Elite Development Squads are for those aged 16-18, and combines playing in college leagues with studying for a Level 3 BTEC Diploma in Sport.

This season, the Rochdale EDS teams have been playing in two of the highest college leagues in the country - The National League U19 Alliance Division J and the English Colleges Football Association Category 1 Group. Additionally, the Manchester EDS teams play in the National Football Youth League.

Currently, there are EDS based in Rochdale, Manchester, Burscough and Birmingham.

Trials are held periodically to join the EDS, with players also being taken from the Development Centres, and those who have been in the Academy without obtaining a full-time scholarship, should they wish to take this path.

There are many pathways available from the EDS program in to further education including University, a career in sport, employment and full-time/semi-professional football.

Tom Cooksey is one of those to benefit from the EDS – you can read about his success story by clicking HERE. Keep an eye out for more success stories over the coming months.

There has also been the creation of the Rochdale AFC Development Centres, which are open to those aged from Under-7 to Under-16.

At the moment, there are five Development Centres across the North West, based in Rochdale, Manchester, Wythenshawe, Liverpool and Bolton.

These run throughout the week and are open to any youngsters who wish to try-out.

They will receive the benefit of coaching from Academy coaches, with pathways open into the Rochdale AFC Academy and EDS. These have provided opportunities to over 20 players to attend Academy trials with nearly half being signed by the Academy.

For a full timetable of the Development Centres sessions, including locations and times, click HERE. 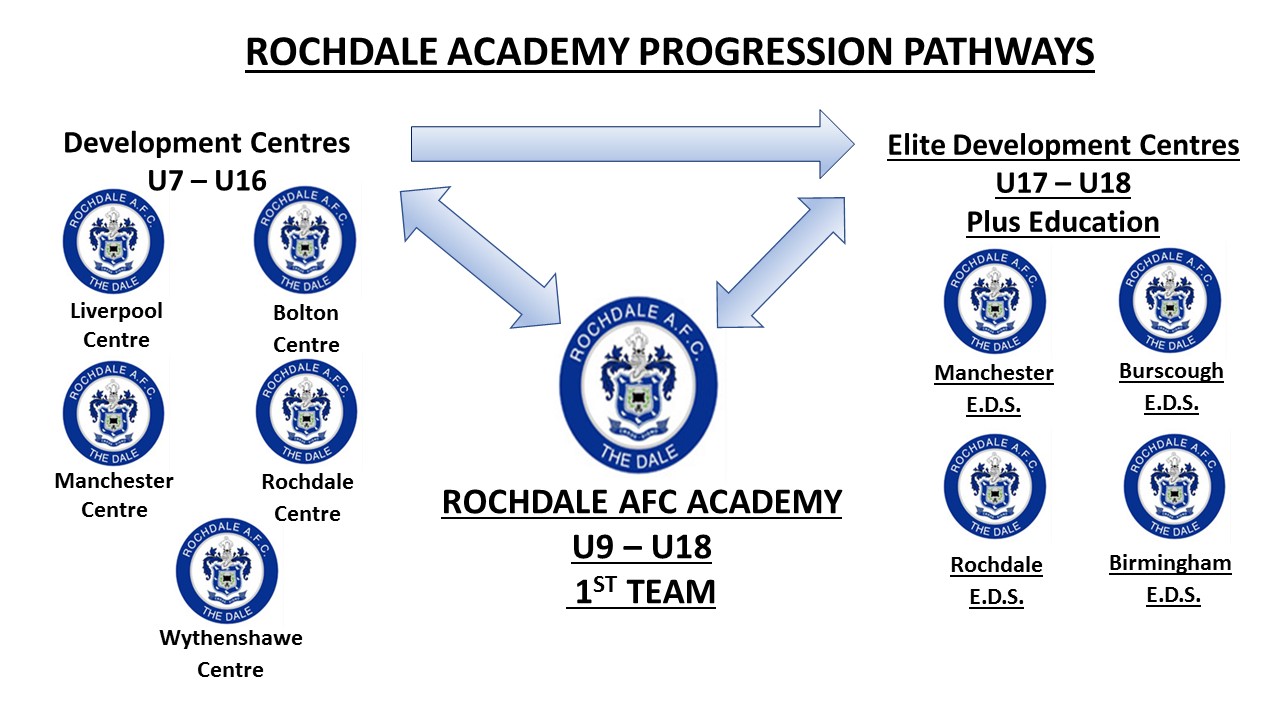