Rochdale AFC’s matchday programme – The Voice of Spotland – is back for Sunday’s Emirates FA Cup fifth round tie against Tottenham Hotspur.

The Souvenir Programme has been extended to 84 pages for this special occasion and contains plenty of reading to keep fans entertained and informed before, during and after the match.

We start with a front cover image of the FA Cup and two of the clubs’ leading players in Ian Henderson and Harry Kane.

In our comprehensive visitors’ section, contributors David Chaffey and Dean Smith each bring us a different aspect of Spurs’ current form and news, while several one-off articles look at links between the two clubs and unusual things that came to mind when the tie was confirmed.

Dale have reached round five only twice before and we review those two games against Crystal Palace and Wolves across four pages.

Anorak’s Corner looks at Dale’s all-time leading goalscorers and, given this is Spurs’ debut at the Crown Oil Arena, we list all the clubs who have so far visited Dale’s home ground only once.

In his column, John Rowe takes credit for Dale being drawn against Tottenham, while Scrutator wonders where this game will fit into the club’s history of FA Cup ties against the game’s giants.

Regular historical features – ‘On This Day’ and ‘Through The Years’ – continue to look at games and events from Dale’s past and Richard Wild tells readers all about his favourite FA Cup win.

Action photos appear from both games against Doncaster and the home league fixture versus Blackpool, while Traveller’s Tales reports on the league visit to the Keepmoat Stadium.

Visitors Tottenham Hotspur get nine pages of coverage, which includes a look at some of their classic kits.

All this and much, much more will be in Sunday’s The Voice of Spotland, on sale in the Club Shop and around the ground, priced £4.00. 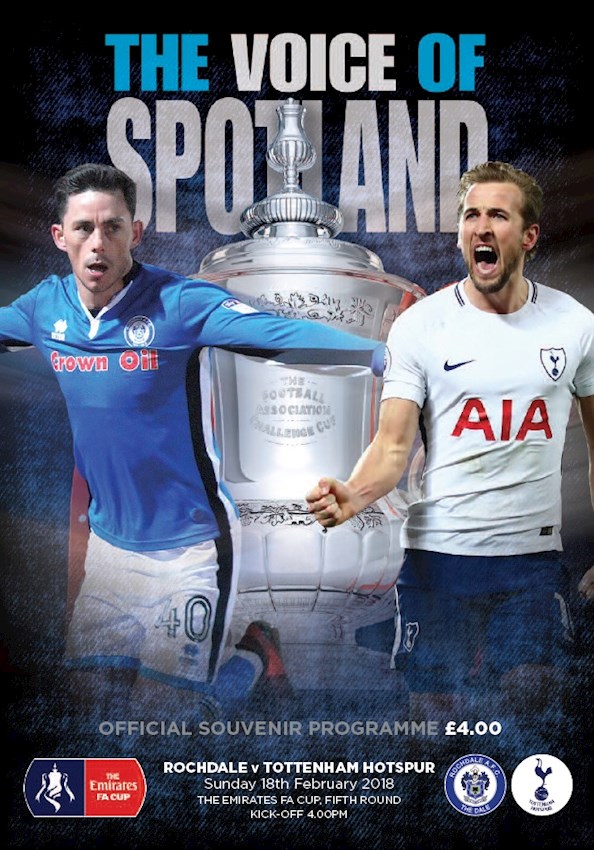