Everyone at the club was delighted on Monday to find out that The Voice of Spotland had been named ‘League One Programme of the Season’.

The award was made by collectors’ magazine Programme Monthly, which reviews and places all 92 programmes in the Premier League and EFL on a division-by-division basis.

‘TVOS’ was a joint runner-up with Gillingham in last season’s awards, so to take the top accolade this term is something we are all very proud of.

In their non-scientific ratings, Programme Monthly gave TVOS an overall score of 9.5/10 for this season’s production and a score of 8.5/10 for design.

Editor Mark Wilbraham said: “I am absolutely delighted that we have been rated as the best programme in League One this season.

“When we sit down with a blank canvas in May, with only one or two ideas about how to fill the pages, the chance of an award like this seems a million miles away.

“All my contributors put in a lot of voluntary hours to produce the programme and it’s nice when these efforts are recognised by an independent body, particularly when we are up against clubs with much greater fanbases and resources.

“It’s excellent that a lot of those who write for TVOS are just supporters with a love for the club and the ability and confidence to articulate their thoughts for the interests of others.

“I certainly couldn’t do it without their help, especially in such a challenging season with cup progress and rearranged fixtures aplenty, but everyone has worked together so well to ensure there is a substantial read on every matchday.

“However, we won’t rest on our laurels and will strive to make next season’s programme even better.” 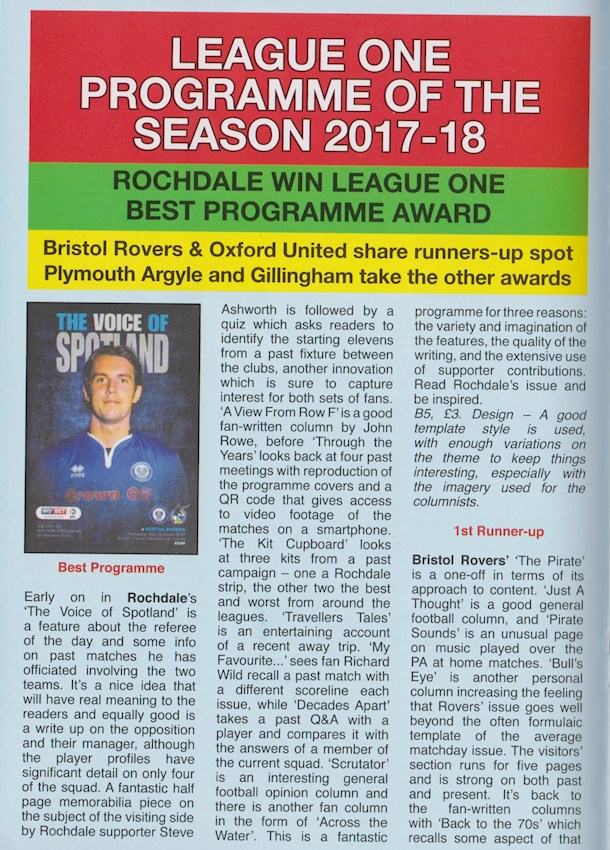