Rochdale AFC’s matchday programme – The Voice of Spotland – is back for the Boxing Day League One fixture against Blackpool.

We start with a festive front cover featuring Jordan Williams, who has scored his first goals for the club this season.

There is also a comprehensive manager’s column from Keith Hill, looking at the first half of the season and ahead to the future.

I WISH I’D GONE – an article looking at Dale games the author didn’t attend, but wished he had! This time it’s a game from October 1983.

WHAT DALE WORE IN – we pick a season and look at the different kits Dale sported throughout the campaign. In this issue, we look at the 2005/06 campaign.

CHRISTMAS DAY FOOTBALL – a look at Dale’s record on 25th December, a date on which they last played in 1957

There is also a completely new-look visitors’ section, as well as the usual League One round-up from Jason Birch.

Many other past contributors continue to produce their excellent columns for the programme, with Scrutator complaining about OTT searches of away fans and John Rowe discussing club ownership.

Meanwhile our regular historical pages – ‘On This Day’ and ‘Through The Years’ – have had a makeover, but will still help readers to jog their Dale memory banks and we have the return of one of our fantastic cartoons in the centre spread, as drawn by cartoonist David Vandepeer.

Action photos appear from the games against Gateshead and Shrewsbury, while Traveller’s Tales is back with a report on the trip to Wycombe.

All this and much, much more will be in Wednesday’s The Voice of Spotland, on sale in the Club Shop and around the ground, priced £3.00. 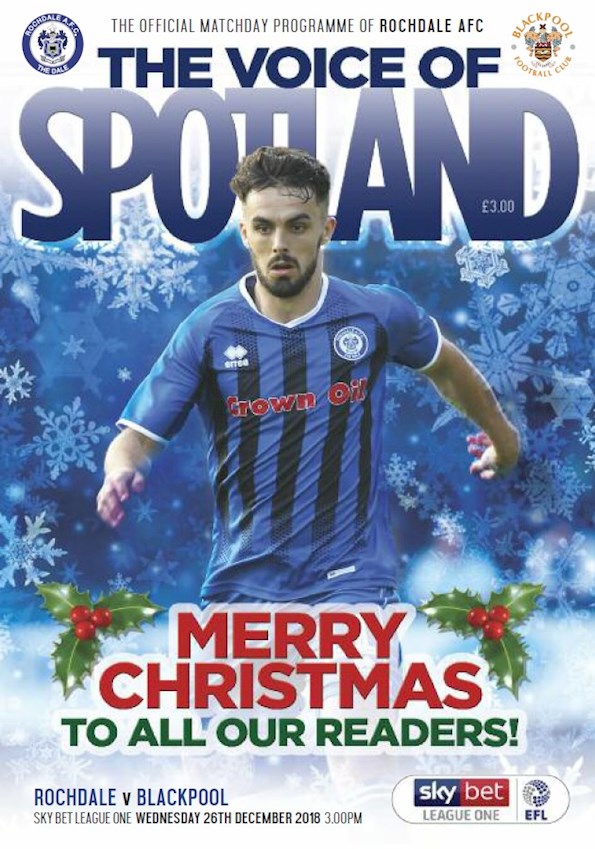