Rochdale AFC’s matchday programme – The Voice of Spotland – is back for Saturday’s League One fixture against Blackburn Rovers.

Our new-look programme starts with a front cover image of forward Matt Done, who returned to the Crown Oil Arena on the eve of this season after two-and-a-half years at Sheffield United.

There is a centre spread poster of ‘Doney’ for our younger supporters to collect, as well as a look at how his personal likes compare to those of a legendary Dale forward from the past in our new ‘Decades Apart’ feature.

In our completely new-look visitors section, contributors Steve Ashworth, David Chaffey and Dean Smith each bringing us a different aspect of Blackburn’s past and present, which is in addition to the usual statistical round-up of the teams’ meetings down the years.

Bray-based supporter Brian Quigley reminisces about a time when Blackburn visited his home town, while John Rowe looks at five things he doesn’t like about football!

We have an interview with a Rovers’ fan conducted by Toby Wright, as well as a quiz page and a puzzle page that can be attempted by supporters of both clubs.

Our regular historical features – ‘On This Day’ and ‘Through The Years’ – continue to look at games and events from Dale’s past and Scrutator reflects on a time when Blackburn were the top team in England.

Action photos appear from the games against Portsmouth and Mansfield, while Traveller’s Tales reports on that trip to Fratton Park.

Visitors Blackburn get nine pages of coverage, which includes a quiz-based article on a previous meeting between the clubs. 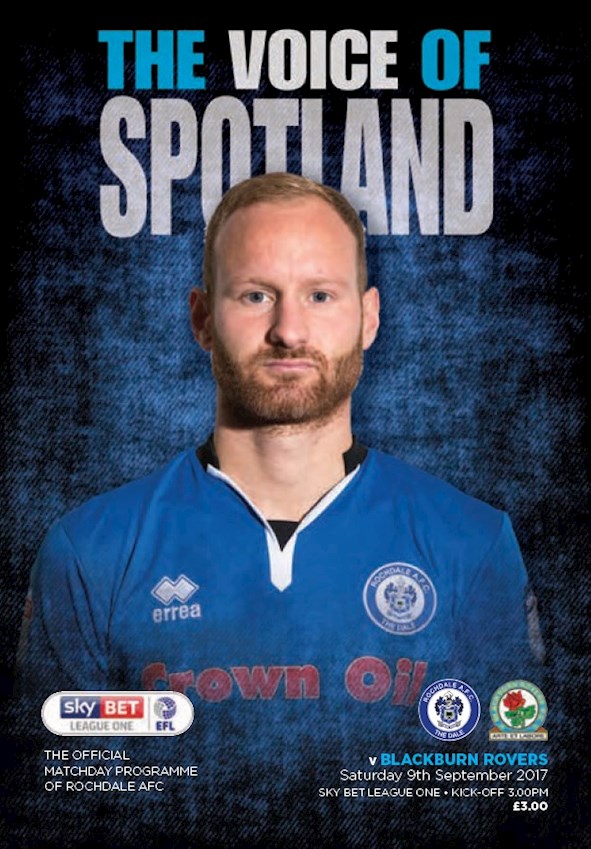