Rochdale AFC’s matchday programme – The Voice of Spotland – is back for Tuesday’s League One fixture against Northampton Town.

We start with a front cover image of goalkeeper Josh Lillis, who recently moved up to second place in the club’s all-time clean sheets list and who discusses the goalkeeping situation in his ‘Manager On The Pitch’ notes.

There is a centre spread poster of Josh for our younger supporters to collect, as well as a look at how his personal likes compare to those of a legendary Dale goalkeeper from the past in our ‘Decades Apart’ feature.

In our comprehensive visitors’ section, contributors Steve Ashworth, David Chaffey and Dean Smith each bringing us a different aspect of Northampton’s past and present, which is in addition to the usual statistical round-up of the teams’ meetings down the years.

John Rowe delivers strong opinions on the scheduled 2022 World Cup in Qatar, while we find out why Scrutator is getting irritated!

We have the latest news from the directors in ‘From The Boardroom’, as well as quiz and puzzle pages that can be attempted by supporters of both clubs.

Our regular historical features – ‘On This Day’ and ‘Through The Years’ – continue to look at games and events from Dale’s past and Bray-based supporter Brian Quigley tells us why, in his view, ‘goalkeepers are different’.

Action photos appear from the games against Doncaster and MK Dons, while Traveller’s Tales reports on that trip to Stadium: MK.

Visitors Northampton Town get nine pages of coverage, which includes a quiz-based article on a previous meeting between the clubs.

All this and much, much more will be in Tuesday’s The Voice of Spotland, on sale in the Club Shop and around the ground, priced £3.00, on the night of the game. 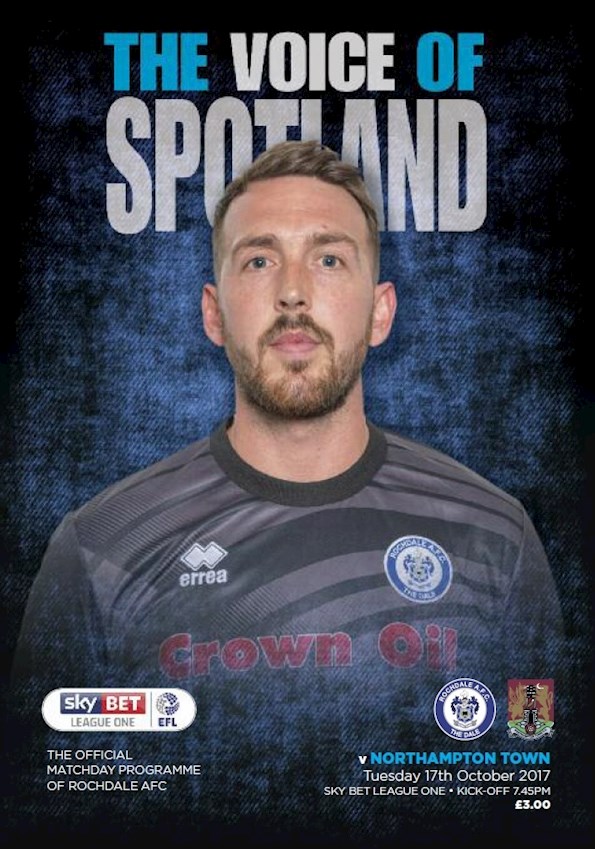