Rochdale are in Checkatrade Trophy action at the Crown Oil Arena on Tuesday night, with Blackburn Rovers the visitors.

Dale head into the match on the back of Saturday’s Emirates FA Cup 4-0 win over Bromley, while Rovers progressed to the second round of the famous competition with a 3-1 win over League Two side Barnet.

Rochdale currently top the Checkatrade Trophy Northern Group C on four points, and Rovers are second in the table, a point behind.

Keith Hill’s side recorded a resounding 4-0 win over Bury in the first group stage game and drew with Stoke City U21s last month. Rovers, meanwhile, beat the Potters and lost to Bury.

All four teams in the group still have a chance of progressing in the competition, although a win or a draw for Dale on Tuesday night would ensure safe passage. The top two teams go through to the knockout stages.

Hill is taking the game very seriously, telling iFollow after Saturday’s Emirates FA Cup win: “The cup game against Blackburn is as equally as important for me.

“We want to progress in the competition and I’ll be bitterly disappointed if we don’t.”

Fans can pay on the night on Tuesday.

The Main Stand is open from home supporters, while visiting fans will be housed in Willbutts Lane.

Dale are 9/5 with Sky Bet to beat Blackburn Rovers.

Rochdale AFC’s matchday programme – The Voice of Spotland – is back for Tuesday’s Checkatrade Trophy tie against Blackburn Rovers.

The reduced 32-page programme covers both of Dale’s home games in Group C, with sections dedicated to Blackburn Rovers and Stoke City's Under 21s, who Rochdale faced last month. 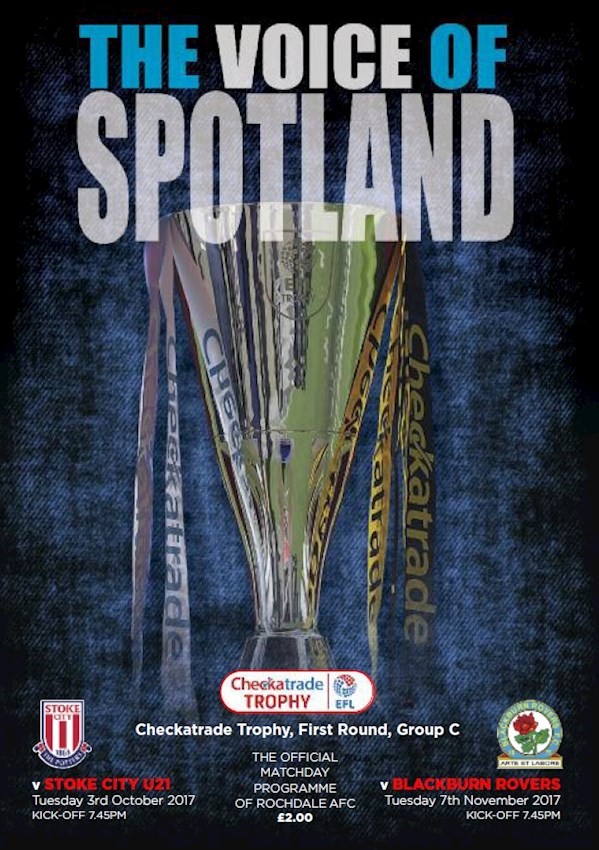