Dale return to action on Saturday with a short trip to neighbours Oldham Athletic.

The sides are separated by one point and two league places going into Saturday’s match, which will be the first game for both sides in ten days due to last weekend’s international break.

Keith Hill’s men are unbeaten in six matches, with just one defeat in the previous 12 games.

Latics have had an upturn in fortunes since Richie Wellens took over as interim manager in September, before being appointed on a full-time basis last month. They've lost two in ten games under Wellens, with the two defeats coming in their last three outings.

A good run of results has seen them climb out of the relegation zone, and they currently sit 18th in Sky Bet League One.

Quotes: "We expect nothing and we’re prepared to fight for everything," Keith Hill.

Read what the Gaffer had to say ahead of the game here > https://www.rochdaleafc.co.uk/news/2017/november/hill-preoldham_17.11.17/

The full 16-minute interview with the Gaffer is available to watch on iFollow.

Supporters who didn’t purchase a ticket in advance can still pay on the day at SportsDirect.com Park.

Use OL1 2PA on your Sat Nav to get to the ground. Oldham Athletic offers matchday parking for £5 per car and £15 per coach on a first come, first served basis.

Rochdale Football Club, the Dale Supporters Trust and the Dale in the Community Trust are, for the third consecutive season, walking/ running to SportsDirect.com Park prior to Saturday’s Derby Day fixture.

All funds raised from the event will go to the Rochdale Food Bank. Everyone is welcome to get involved, whether you intend on raising money or not.

For more information, including an itinerary and online sponsor form, click HERE.

Dale are at odds of 6/4 with Sky Bet to pick up all three points on Saturday. 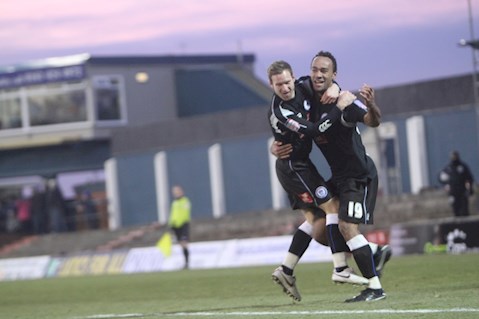 We flashback to January 2011, when Dale recorded a memorable 2-1 victory over Oldham at SportsDirect.com Park.

Click HERE for a full flashback of the victory.

The match is also available to watch live for supporters overseas.

Rochdale fell to a 3-1 defeat at Sportsdirect.com Park on Saturday, as Eoin Doyle scored two late goals to put the game beyond Dale.

Doyle netted a brace inside the last 10 minutes to clinch the points for Richie Wellens’ side.

Manager Keith Hill named the same starting eleven that lined up against Bromley in the Emirates FA Cup a fortnight ago.

The hosts took an early lead when Dummigan powered a header beyond Josh Lillis from an Eoin Doyle cross after just two minutes.

The goal set the tone of the opening stages, and as the Latics started on the front foot, it ensured a frantic start to the game.

But despite the pressure, Dale limited the number of clear cut opportunities created by Oldham and it was Dale who went on to see an effort denied on the line before levelling the scoring after 16 minutes.

With 10 minutes on the clock, Bradden Inman delivered a corner into the area which was headed away as far as Callum Camps, who drove at goal and sent the ball back in. Kgosi Ntlhe won the header, and as the ball dropped kindly for Ian Henderson, his strike was kept out on the line by the Latics goalkeeper.

And it was shortly after the quarter of an hour mark that Dale equalised. After capitalising on an Oldham error, Done drove at goal and slotted into the back of the net.

The woodwork stood in the way of a Dale second on the half hour, when Calvin Andrew, who had beaten Placide, was denied by the foot of the post.

Davies had seen an effort creep past the upright before Andrew had been kept out by the woodwork, and the Oldham forward was involved in the action again a short time later when he forced Lillis into an excellent save.

Before the half was out, Dan Gardner’s effort took a deflection, sending it behind, and Latics came close again. Rafferty was forced to hook away a low ball across goal, as Doyle loitered inside the six-yard box.

There was one change for the start of the second half, as Joe Bunney replaced Kgosi Ntlhe.

The hosts started the half in the same manner as they had the first, and Lillis pulled off two tremendous saves during the opening exchanges.

After a Latics free-kick on the right was swung into a packed area, the home support had rose to their feet to celebrate a Davies goal, but the Dale stopper had somehow kept the ball out of the back of the net. Soon after, he kept Doyle out.

Rochdale’s best chance of the half came in the 67th minute, when Andrew’s inch perfect pass enabled Henderson to beat the offside trap. It was a golden opportunity but Placide got down to keep out the Skipper's curling effort.

First year pro Matty Gillam replaced Inman a minute later, as Keith Hill made his second change of the match.

Oldham introduced Aaron Amadi-Holloway into the action and the substitute made an immediate impact, as he struck into the side netting after driving up the right.

Played at a frantic pace, the game was end to end, but it was the hosts who went on to net twice late in the match to take the points.

Doyle fired home after an Oldham free-kick was partially cleared away and fell to the Oldham striker inside the packed box.

He then extended Latics’ lead with a wonderful finish, lobbing the ball over Lillis from outside the area.

Andrew then had an effort saved as Dale tried to find a way back into the game, and Davies, who had been brought on as a substitute shortly after Doyle’s first, delivered a dangerous ball across goal, but as Done came sliding in to get on the end of it, he couldn’t make a connection.