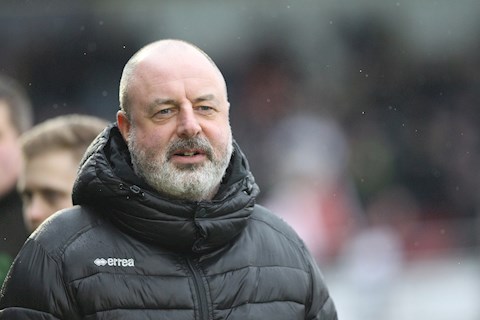 Dale are back on the road this weekend, travelling to Glanford Park to take on Scunthorpe United.

The Iron are without a win in seven league matches, but still remain in the play-off spots thanks to their impressive opening to the campaign.

The two sides played out a 1-1 draw earlier this season at the Crown Oil Arena, when Steven Davies’ header was cancelled out by Duane Holmes.

Manager Keith Hill was on pre-match duty. He covered a number of topics including:

Read what he had to say HERE. Watch the full interview on iFollow.

Supporters who didn’t purchase in advance from the RAFC Ticket Office can still pay on the day at Scunthorpe.

For a complete guide to Glanford Park, including directions and parking, visit Scunthorpe’s website by clicking HERE.

Saturday is the 100th meeting between the two sides!

Sky Bet are offering odds of 5/2 for Rochdale to win at Glanford Park on Saturday.

Rochdale claimed a point on the road following a 1-1 draw with play-off hopefuls Scunthorpe United on Saturday.

Callum Camps opened the scoring in the first half, leaving Matt Gilks rooted to the spot with a strike from 25-yards, but the Iron levelled the scoring through Ivan Toney six minutes after the break, earning a point for his side.

The Iron had a couple of half chances with the opening few minutes, with Josh Morris firstly seeing an effort deflected past the post from a Gilks free-kick, before Funso Ojo hit narrowly wide of the target from the resulting corner.

Dale’s first opportunity of the game came in the seventh minute, when Callum Camps sent a well weighted ball over the top for Bradden Inman, who beat the offside trap, and saw his volley drop just over the bar.

And it was Rochdale who broke the deadlock with 20 minutes on the clock, thanks to Camps. A corner came to the Dale midfielder 25-yards out and he struck a speculative effort at goal, leaving Gilks rooted to spot as the ball nestled itself in the bottom corner.

Five minutes before the break, Dale had opportunity to double their advantage, when a free-kick was flicked on into the path of Rathbone, who couldn’t get the decisive touch needed, and was left holding his head in hands as the ball bounced wide of the upright.

Before the half was out, Ian Henderson dipped an effort over the bar from 35-yards, and Scunthorpe’s Tom Hopper blasted a shot high and wide without troubling.

The Iron levelled the scoring six minutes after the re-start, when Toney headed home from a corner after Tom Hopper nodded back across goal.

Minutes later, Gilks pulled off a tremendous save to deny Henderson, who sent a glancing header towards the bottom corner from a Camps free-kick into the area.

On the hour, Morris struck inches wide of the post, before Dale won a corner and Henderson was again kept out by the Iron goalkeeper.

Duane Holmes let fly from distance and saw his effort flash narrowly wide of the post, but it was Rochdale who rallied during the latter stages of the game and came closest to taking the three points.

Wiseman replaced Rathbone with a quarter of an hour left, and he was involved in the thick of it not long after. From an Inman corner, he was kept out on the line by Gilks, who did exceptionally well to claw away his flicked effort.

In stoppage time, Steven Humphrys was introduced in place of Inman, and he had an effort deflected wide of the target in what would prove to be the last action of the game.