It’s third round weekend of the Emirates FA Cup, and Dale make the trip to Doncaster Rovers for the second time in eight days.

Dale have beaten non-league sides Bromley and Slough Town – both 4-0 – to reach this stage, whilst Doncaster beat Ebbsfleet United 6-2 in the first round, and fellow League One side Scunthorpe United 3-0 in the previous round.

Keith Hill has said he expects his players to learn from their league defeat at Doncaster a week ago, and that he expects a bounce from the squad.

Keith Hill has given an update on the fitness of his squad ahead of the game.

Joe Rafferty, who has missed the last three games, is expected to return. However, Steven Davies has joined Niall Canavan (ankle) on the long-term injury list after sustaining a groin injury in the league game against Doncaster.

Supporters who did not purchase a ticket in advance can still pay on the day at the Keepmoat Stadium.

For a guide on how to get to the Keepmoat Stadium, and for details on parking, please visit Doncaster's website HERE.

Rochdale are at 13/5 with Sky Bet to beat Doncaster Rovers on Saturday in the Emirates FA Cup third round.

Dale have reached the fourth round of the FA Cup in three of the previous four campaigns.

Take a look back at our three most recent third round victories, including wins against Barrow AFC, Nottingham Forest, and Leeds United. 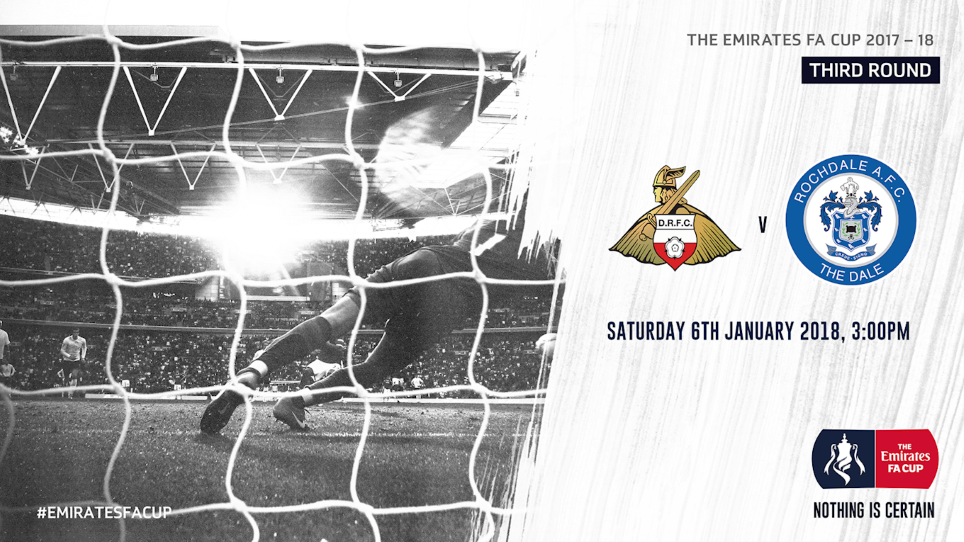 Calvin Andrew’s goal secured Dale’s place in the fourth round of the Emirates FA Cup, with a 1-0 win over Doncaster Rovers.

Andrew headed home Joe Bunney’s right wing free-kick in the 18th minute, and although the home side threw everything at Dale in the final ten minutes, the defence stayed strong and ensured Dale are in the hat for Monday’s fourth round draw.

Manager Keith Hill made three changes to the side that lined up against Blackpool on New Year’s Day.

16-year-old Daniel Adshead started in the Emirates FA Cup tie, while Joe Bunney and Jim McNulty returned to the eleven.

The hosts started brightly but Dale rode the early pressure and went on to net first. Despite Rovers huffing and puffing during the opening exchanges, they failed to register a shot on target.

As Dale grew into the game, Matty Done, who was playing in an attacking role, had Rochdale’s first chance of the match, as he flashed a cross-come-shot across the face of goal and just past the upright.

With the impetus swinging in favour of Dale, the goal came three minutes later, when Keith Hill’s side were awarded a free-kick for a foul on Andy Cannon.

Bunney delivered the set-piece into the area and Andrew rose highest to head beyond a stranded Ian Lawlor, who was left rooted to the spot.

Played at a high tempo, Rochdale looked the likeliest to add a second during the half, as they frustrated the opposition both defensively and offensively.

Donny’s most notable effort came from Matty Blair, but his long-range effort was comfortably held by Josh Lillis.

Five minutes before the break, Jimmy McNulty picked out Bunney on the left with a ball out wide, and Bunney’s cross was tipped round the upright by Lawlor, as Andrew came racing came charging in.

There were no changes for either side at the break.

The second half was end to end, as Rochdale searched for a second and Doncaster tried to find an equaliser. If not for Lillis, they would have been on the score sheet in the 54th minute, however the Dale goalkeeper pulled off a tremendous save to deny Alfie Beestin from six-yards.

Four minutes later, Ian Henderson let fly from 20-yards. Lawlor saw it late and dived to his right, but the effort dinked just past his post.

On the hour, Rochdale came close again, as Joe Bunney rattled a powerful effort narrowly wide of the upright from the edge of the area.

Dale’s first substitution of the game soon followed, as the superb Adshead was replaced by Keith Keane.

The hosts struck the woodwork in the 66th minute, with Marquis’s shot from the edge of the area kept out by the base of the post.

Their third appeal for a penalty in five minutes came shortly after, as Darren Ferguson’s side continued to be left frustrated by Dale’s excellent defending. The referee on every occasion said no.

Going into the closing stages, Rochdale were forced to defend with their lives as Doncaster threw everything at them.

Butler headed just wide of the upright, before the home side’s best chance of the game was wasted by Tommy Rowe, when he fired over from close range after being found by James Coppinger.

Andrew had a couple of efforts blocked, but he was instrumental at the other end of the pitch late on, heading clear Doncaster balls into the area on numerous occasions.

Jordan Houghton fired over with the home side’s final chance, and despite late pressure, Dale were able to hold and secure their place in the fourth round of the Emirates FA Cup.